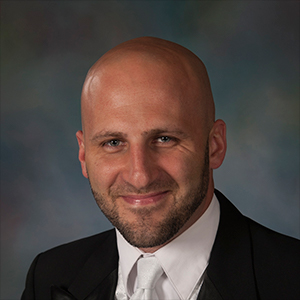 Brandon M. Rockstroh, first and foremost, is proud to be father of 6th grader Avaya and kindergartener Oscar.  Professionally, he is in his 13th year as Director of Choral Music at Southwest High School, having previously taught middle school for two years in Mequon, WI.  Under his direction, the number of students enrolled in choir at SWHS has risen from 102 students to as high as 240 students!  In 2016, along with three music parents, Brandon led a $250k renovation of the school’s auditorium.  He has directed 11 musicals and plays while at Southwest, he serves on the Building Leadership Team as Music Department Chair, and he has served as Cooperating Teacher for 8 student teachers, who are now all professionally employed in music education.

In 2008, Brandon graduated with honors from UW-Milwaukee with a Bachelor of Fine Arts Degree in Choral & General Music Education.  In 2012, the Green Bay Chamber of Commerce named him a “Teacher of Distinction” and in 2016, a Golden Apple Award recipient.  In 2017, he was the lone recipient of the Outstanding Young Choral Director Award by the Wisconsin Choral Directors Association.  And in 2020, he was awarded the prestigious Herb Kohl Teaching Fellowship.  His choirs have performed with musical legend Kenny Rodgers, child prodigy Ethan Bortnick, and were selected to perform at the 2012 Wisconsin Music Educators Association (WMEA) State Music Conference and the 2014 and 2022 Wisconsin Choral Directors Association (WCDA) State Conventions.

Brandon has served as Artistic Director of the Green Bay Boy Choir, and has been guest conductor for Real Men Sing and Singing in Wisconsin.  As a singer, Brandon has performed in honors choirs and many theatrical productions, including professionally in the 2013 New York Musical Festival (NYMF).

Brandon’s original musical, The Book of Empty Pages (thebookofemptypages.com), premiered in 2017 to critical acclaim.  A professional production of the show will take place in July 2023 in DePere, WI.

Return to “About” page